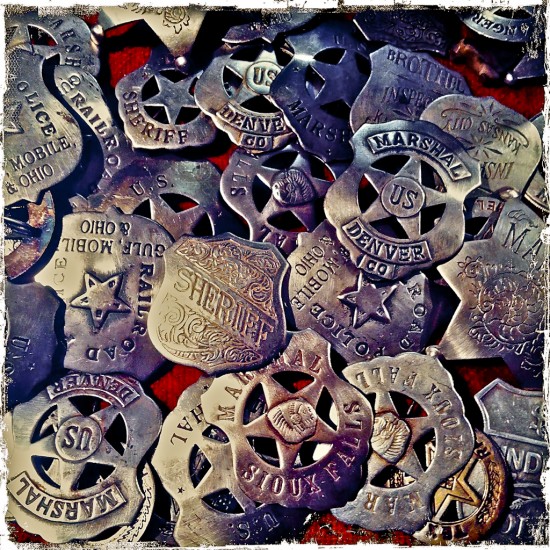 The commission to find an image to illustrate the iconic, though misquoted line, “Badges! We don’t need no stinkin’ badges!” started as a misunderstanding between my dear friend Tom Parker and myself around his acquisition of a number of my photographs. When we finally cleared up the misunderstanding, the laughter shared was raucous and the challenge placed before me!

In the months that followed, looking for inspiration, I learned more about the quote from the 1948 film Treasure of the Sierra Madre. This iconic film, directed by John Huston and staring Humphrey Bogart, was an adaptation from a 1927 book by the same name written by B. Traven. The actual line in the movie, a response to Bogart’s characters’ question, “If you’re the police where are your badges?”, was delivered by Alfonso Bedoya, playing a Mexican bandit leader saying, “Badges? We ain’t got no badges. We don’t need no badges! I don’t have to show you any stinkin’ badges!”

Digging deeper I discovered that the current incarnation was uttered first by Mickey Dolenz on the 33rd episode of the TV show The Monkees. What you can find out these days on a Google search! But the classic and most remembered version had to be from Mel Brook’s Blazing Saddles.

Well, the information didn’t help inspire me till, wandering through Virginia City, NV, the commission came to mind while looking in a display case of a tchotchke shop along its tourist-trap main street. There I found this collection of badges! Inspiration or chance are often confused but I think I was actually confused by another line from Blazing Saddles – “Somebody’s gotta go back and get a shit-load of dimes!”

Inspiration or confusion, who’s to say…

Like most little boys, driving past Fort Ord army base along the Monterey Bay in the late 50’s and 60’s, I was fascinated by … END_OF_DOCUMENT_TOKEN_TO_BE_REPLACED