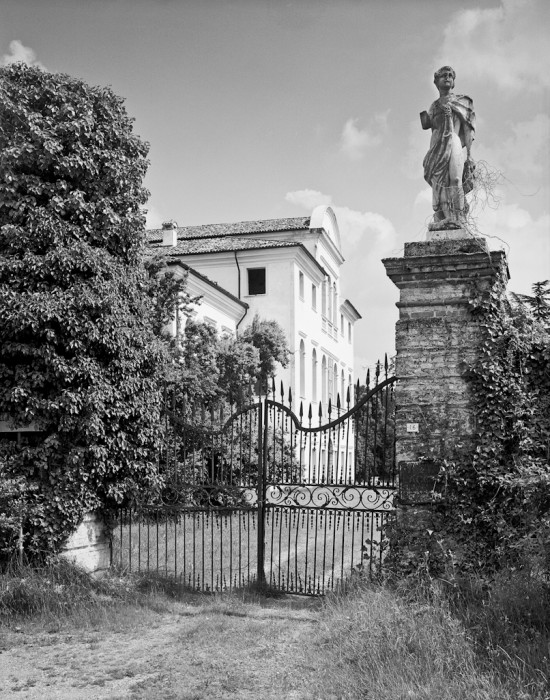 In 1995, I returned to Italy. All I knew was that I needed to take photographs in Italy and even though I hadn’t a clue what I was going to photograph, I had faith that it would become obvious soon enough.

To familiarize myself with the area I bought a map and the names of the towns in my Father’s stories jumped out at me. So I decided to make my way to each and see what was there. The first morning I started driving towards one of the towns, camera in the trunk I soon sensed the energetic thread of a photograph. It wasn’t long before I came to a village called Villanova – a corner in the road. I slowed to negotiate it and saw a crumbling wall kept upright by logs leaned into the bulges. I followed the wall covered by vines that crept onto an ornate iron gate at its opening. A quick glance through the filigree lattice of the gate revealed only a grassy track leading to the woods beyond. The spirit doesn’t speak in loud gestures, not even in Italy. I drove on. But a niggling feeling arose. Was it the crumbling wall, the gate, the vine, the statue or jet lag that convinced me to turn my car around, I do not know? But I did.

Driving back over the road I had just taken, I felt the adage, “hindsight is 20/20” taking form. Approaching the bend in the road, I saw the gleaming arched facade of the early 18th century villa known as Villa Marini. I stopped the car and with practiced hands set up and took a photograph of the villa – a building. How could I continue hiding from the fact that I had been mentored by an architectural photographer, became an architectural photographer, and here in my art, was speaking in the voice of architecture without recognizing the influence my Father, an Architect, had on my life? In this moment of confluence my thoughts and feelings did not boil as they had in the past. Instead a feeling of clarity arose. Was this the understanding that I was trying to uncover?

With this feeling as my guide I began looking for and photographing the old buildings of the area. In those towns and villages that were the settings for my Fathers stories, I found the churches, roadside chapels and mausoleums in their honor of the spirit – the sacred and the villas in their excesses – the profane.

In them I also found an understanding of my Fathers life.

Like most little boys, driving past Fort Ord army base along the Monterey Bay in the late 50’s and 60’s, I was fascinated by … END_OF_DOCUMENT_TOKEN_TO_BE_REPLACED