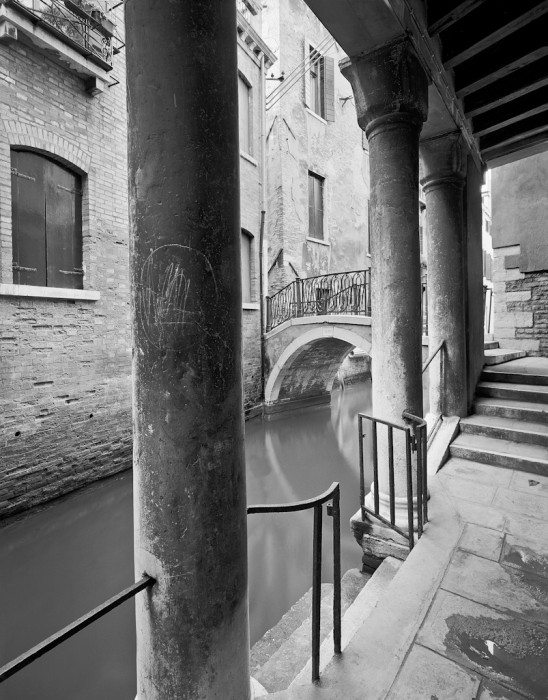 When I visit my family in Venice, my Uncle, wanting to share our mutual love of photography, accompanies me on my afternoon excursions into the maze.

He was my Father’s best friend and became part of the family by marrying Dad’s youngest sister. He is a reservoir of stories and adventures he had with my Father and an amazing guide to Venetian history, so I pay attention when he speaks. But he mumbles in a dialect I am familiar but not comfortable with and he also has difficulty walking in silence, which makes my being open to my photographic inspiration virtually impossible. Not wanting to seem rude or ungrateful, I stew in my frustration.

One particular day passing through Campo San Polo, stewing, we came upon two of my Uncle’s friends. Between Venetians, of a certain age, there are traditions that have survived the centuries. Maybe not with the flourish it once had but the courtly bow still exists. Having been a few paces behind, I took his arresting gesture as an opportunity of turning down a side calle – I ditched my Uncle!

Out of his sight, I raced through this unknown part of town to make good my escape. I pressed on, comfortable knowing he would excuse my lack of courtly sensibilities by simply stating Americano! with a shrug. But escape was not too be. The calle came to an end.

In my stunned disbelief or hope in finding some hidden escape, I pressed on to the private door of the Palazzo that was the end. In my resignation, I turned to face the consequences of my action. In that acceptance of my fate, La Serenissima, Venice’s moniker in honor of her serenity, presented me with an exquisite view of three columns that flanked this water entrance. I have no idea if the reason I was given this image was to provide me an excuse for ditching my Uncle or an opportunity to throw my dark cloth over my camera and myself to magically disappear.

I have never learned the incantation for vanishing but the lesson of facing my choice did not escape me – nor did this photograph.

Like most little boys, driving past Fort Ord army base along the Monterey Bay in the late 50’s and 60’s, I was fascinated by … END_OF_DOCUMENT_TOKEN_TO_BE_REPLACED