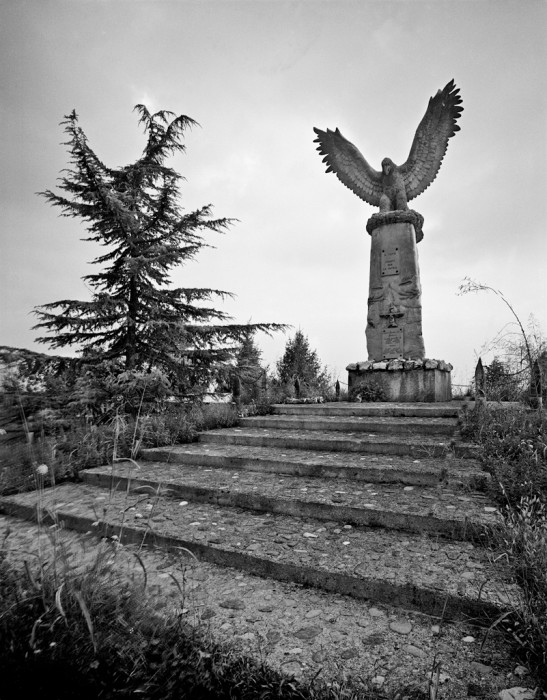 Per I Caduti Alpini, San Leonardo

Per I Caduti Alpini

This military monument, Per I Caduti Alpini in San Leonardo, is about 10 km from Maniago, Italy. I was between our Maniago house and Zio Gino’s permanent home in Pordenone when I saw these large wings above the cornfields. I questioned my eyes since at that distance this bird, if it were real, had to be huge.

I have never been shy about traveling on farm roads and as soon as I was able to pull off the highway and track this bird, I did. Tall dried stalks of corn lined the roads and in my rented Fiat I worked my way through the maze and mud in the direction of the bird. A couple of times I had to stop, get out of the car and stand on the bumper to get my bearings but I finally found this monument and its mirroring pine in among the fields.

There is a history of Alpini in our family, a division of the Italian army specializing in mountain warfare. As a child, knowing only that they lived in the mountains and forests, I thought them elf-like down to their signature conical hats. So finding this monument with its adjoining picnic grounds, felt a bit like I had found a magical elf’s den. I have to admit that while I was taking the photograph I walked very quietly, not wanting to disturbed them further. Later that day, when I described the monument to Zio Gino, he couldn’t believe it. He insisted I take him there and shook his head in disbelief when we arrived. He had lived in the area all his life and passed this monument for more than 75 years without noticing it. He was embarrassed but proud of me for finding this treasure in his back yard.

Sharing this photograph with my Father, a long discussion of where it was and the Alpini of our family ensued. A story leading into another and then another and another….

Many years ago I had the pleasure of meeting an elf and long time San Francisco photographer Ruth Bernhard. In her airy and mystical way, she challenged me, as she did all her students, to photograph within 10 yards of my bed. Taking this challenge I learned about the familiar that has become invisible.

This photograph will always remind me of the magical feeling of seeing this bird landing in the cornfields and the discovery that elf’s, like all magical creatures, hide in a most effective way – right in front of us!

Like most little boys, driving past Fort Ord army base along the Monterey Bay in the late 50’s and 60’s, I was fascinated by … END_OF_DOCUMENT_TOKEN_TO_BE_REPLACED