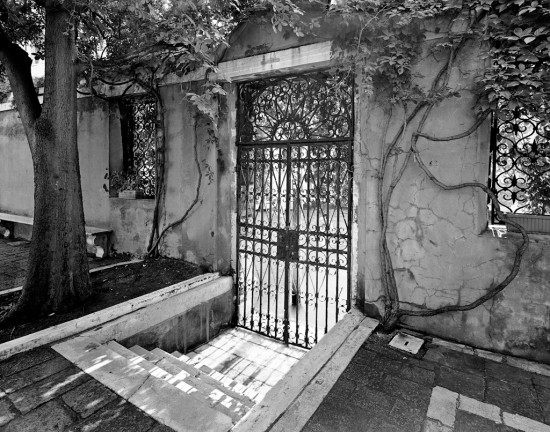 The gates off the Rio dei Greci, in Venice, is the entry to the Greek Embassy and the Greek Orthodox Church of San Giorgio dei Greci. The bench in the shade was a cooling oasis for my Uncle, cousins and myself. Though the afternoon was sweltering, the sun streaming through the iron gate called me to set up my camera.

It became a habit with my Uncle that he would shake his head in disbelief as I set up my camera. He had a difficult time understanding what I saw in the scenes where I pointed my camera. Not understanding what I saw in this scene he got up and asked to look through the camera. Obliging him I was greeted by an approving grin as he stepped out from under the dark cloth that I throw over my view camera and myself while setting up a photograph.

Climbing back under the cloth to finish my preparations for this photograph a question came to mind. Who has stepped through these gates? This kind of question haunts me in Venice. The streets and canals still echo the long history of the Venetian Republic – the footsteps of the illustrious and nefarious mingling on every paving stone.

Like most little boys, driving past Fort Ord army base along the Monterey Bay in the late 50’s and 60’s, I was fascinated by … END_OF_DOCUMENT_TOKEN_TO_BE_REPLACED