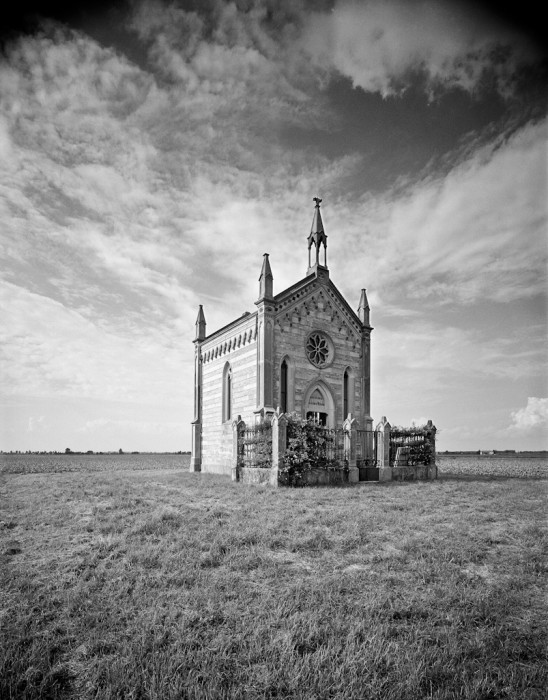 We were traveling to the beach at Bibione where my Cousin has an apartment that they live in during the August holidays. Here in June they decided to show it off to me. The road to Bibione travels along the plains that are the delta for the Tagliamento River. Along the road there are fields of rice and soy as far as the eye can see. In the middle of one of those fields was this family mausoleum of white and pink brickwork. Surrounded by a soy field, a patch of tended grass surrounded this monument to the family who owned the property. We didn’t stop on the way to Bibione but on the return it called to me.

We stopped and being humored by my family, I tried to move as quickly as possible to get an image. At the front of the mausoleum was a long corridor of olive trees leading from the road to the entry but I found my way to the back of the building and what expressed my feeling about the building when I first saw it – a lone stalwart in a low field. The wide angle lens and stand back view highlights this feeling. But from under the dark cloth another part of the image came into focus.

My Father had studied art history at the University of Venice in the late ‘30’s. His passion for art he shared with me. Of all the artists we were introduced to, Michelangelo was and is my favorite of the Rinascimento but his skies, I felt, were the imagination of the great painter/sculptor.

In this field, late in the afternoon, under the dark cloth composing this photograph, I saw a Michelangelo sky! For the first time I saw that it wasn’t his imagination but his experience that Michelangelo drew from for The Last Judgment in the Sistine Chapel.

Why this recognition came to me I cannot say. Was it the feeling that I had as a twelve-year-old standing in front of the fresco or the actual memory of the painting I don’t know? But the Last Judgment was more impressive to me than the ceiling. Maybe because turning my head up to see the ceiling was painful and the wall holding the Last Judgment was less so. Who can remember or articulate what catches ones eye but it was this sky that made me return to that day in 1967 standing in the Sistine Chapel and say aaaahhhh!! Again.

Like most little boys, driving past Fort Ord army base along the Monterey Bay in the late 50’s and 60’s, I was fascinated by … END_OF_DOCUMENT_TOKEN_TO_BE_REPLACED