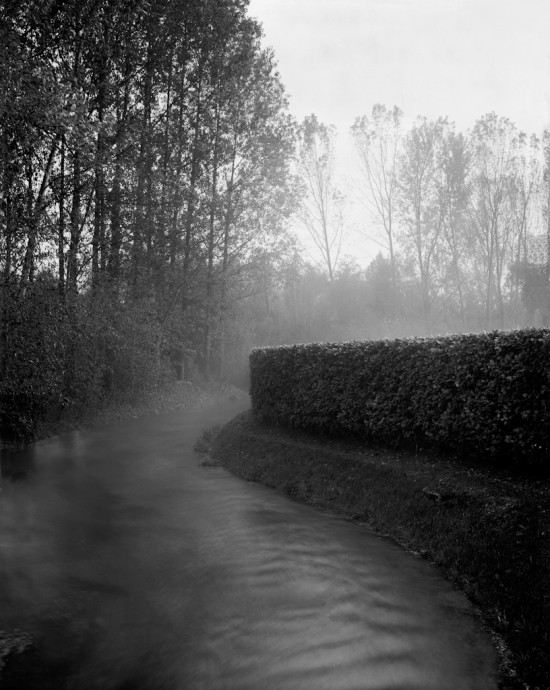 The Noncello River like many of the rivers in the northeastern part of Italy is spring born of Alpine run off carried through underground aquifers. The birthplaces of these rivers are spectacular. The most famous of the area is the Livenza that starts in a clear spring grotto. These river nurseries are a marvel often surrounded by tourist attractions and in some by electrical generators harvesting their natural energy.

The Noncello River’s spring is set in fields outside the town of Cordenons. A manmade pool enclosing the spring is the midwife to the birth of the Noncello. Controlling its flow in a predictable way, from its birth to its confluence with the Meduna River in the heart of the adjoining town of Pordenone, it winds along in a channel.

On this fog laden morning I found myself in the farm fields that surrounded Cordenons while following a training route my Father took on his bicycle. The bridge that crossed over the river was the change, from controlled paved roadway to the wilder unpaved field roads beyond. The morning fog was lifting from the water when I crossed the bridge, a surreal scene that made me think of the mythic river Styx. The manicured bank and trimmed hedge on the right shielded a factory parking lot from the savage and unruly opposing bank. While setting up my camera I had to ask myself which side was Hades on?

Like most little boys, driving past Fort Ord army base along the Monterey Bay in the late 50’s and 60’s, I was fascinated by … END_OF_DOCUMENT_TOKEN_TO_BE_REPLACED