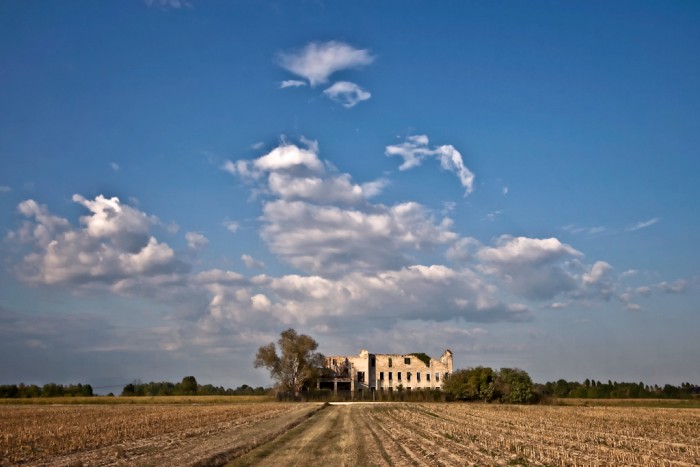 I don’t know how many of these old farm houses I’ve passed while driving around my home in Italy, but I didn’t notice them till this crisp day in September. These clouds were the first things that caught my attention, and while I was trying to negotiate a busy stretch of tree-lined highway, I kept glancing over at them; a glimpse, here and there through the trees. At one point, the trees fell away revealing a harvested field fully exposing the clouds in a grand sky.

There are times when I feel a photograph approaching. An upwelling sense of excitement, anticipation. So I was ready… and rewarded, as one of those glimpses, registered a fully formed view of these clouds seemingly emerging from this hulk of a 19th century abandoned farm-house. Though abandoned and in varying states of decay, these stately structures, give testament to a slower time when man and beast worked side by side in the fields. But I wasn’t on a horse or carriage pulled by one, I was in a speeding rental car!

Over the years I’ve learned that fate has a role in being able to capture a photograph, and resign myself to the fact, that, at times, an image will be mine alone to enjoy on the walls of my mind or shared in a story as one that got away.

But damn it, this was not going to be one of them!

So I quickly swung off the road, put the car in reverse and backed up along the shoulder, while being screeched, barked and beeped at by a succession of animated Italian tailgaters. Finding my way back to the spot of the “fully formed view”, apologizing, I quickly jumped out of the car grabbing my camera, put it to my eye and proceeded to slip and roll down the roadside embankment, stopping inches from a plunge into the collected ditch water! Focused on my goal, I looked up from my prone vantage point and took this photograph.

Another thing I’ve learned about fate is that sometimes, it can make you look like a character from a Roberto Benigni skit!

Like most little boys, driving past Fort Ord army base along the Monterey Bay in the late 50’s and 60’s, I was fascinated by … END_OF_DOCUMENT_TOKEN_TO_BE_REPLACED